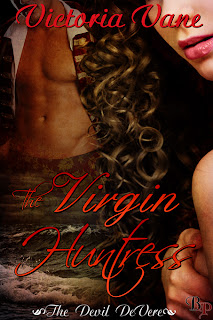 eBook or Print or Both:  e-book June 29, 2012  will be released in print later in an author collection

Desperate times call for devilish measures… when the object of one's  passion has eyes for another… it's time to take matters in hand!
***
Lady Vesta Chambers is accustomed to getting what she wants…and what she wants is Captain Hewett DeVere…
Coddled and pampered, since her mother's death, Lady Vesta Chambers is beside herself when her father goes to London to prepare for her come-out and returns with a young bride of his own. With her world turned upside down, Vesta accompanies her godmother, Diana, to town, where she is smitten the moment she lays eyes on a certain captain of the Seventeenth Light Dragoons.
But when the object of her passion has eyes for another…
Captain Hewett DeVere, younger brother and heir to Viscount Ludovic "The Devil" DeVere, has returned from the American war scarred, disillusioned, and looking forward to settling down to a quiet and respectable life. But when the handsome and straight-laced captain turns his eyes toward the widowed Diana, Vesta is prepared to take devilish measures to prove just how wrong he is.
And the Devil DeVere looks after his own…
Recruiting the aid of her godfather, Vesta vows to prove to Hew once and for all that she is no longer a little girl, but a woman with the passion of …a huntress.
Posted by Shiela Stewart at 5:42 AM