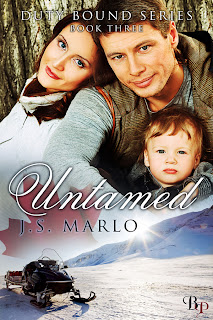 Publisher: Breathless Press: http://www.breathlesspress.com
eBook or Print or Both: eBook
Genre: Romantic Suspense
Heat Level: Sensual
Places to purchase:
Breathless Press at http://www.breathlesspress.com/index.php?main_page=product_free_shipping_info&cPath=15&products_id=429
Amazon at http://www.amazon.com/Untamed-Duty-Bound-ebook/dp/B00BR08JA0/ref=sr_1_1?s=books&ie=UTF8&qid=1362775561&sr=1-1
Adult Content: Sensual
Cover Artist: Mina Carter
Blurb:
Shaped by tragedy. Bound by duty. Driven by justice. Avery trusts his instincts, not the law, to protect a deaf woman and her young son.
***
Posted in the heart of winter to a remote detachment in Newfoundland, Constable Avery Stone is a freshly demoted Mountie with a rogue streak. As he looks into the death of a disgraced officer, he stumbles onto a plethora of unresolved crimes. His troubling investigation throws him into the path of Hannah Parker, the feisty deaf mother of a young boy.
To escape her past, Hannah moves into her grandfather's secluded cabin. She catches a glimpse of his killers in the woods, but her credibility is damaged by recanted accusations. The birth of a fatherless son further tarnishes her reputation, and hinders her ability to trust. When shadowy forces threaten her family, Hannah is forced to rely on Avery.
Tangled in a web of deadly deceit, Avery seeks to protect Hannah and her son while desperately trying to retrieve the crucial evidence locked inside their minds. Can Hannah recapture her past in time to save her only child and the man she's come to love?

Posted by Shiela Stewart at 7:59 AM No comments: 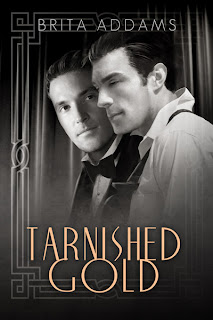 Publisher: Dreamspinner Press: Dreamspinner Press Print
eBook or Print or Both: Both print and ebook
Genre: m/m historical fiction
Heat Level: 4 of 5
Places to purchase: Dreamspinner Press (links above)
Adult Content:erotic, BDSM-lite
Cover Artist: Anne Cain
Blurb:
In 1915, starstruck Jack Abadie strikes out for the gilded streets of the most sinful town in the country—Hollywood. With him, he takes a secret that his country hometown would never understand.

After years of hard work and a chance invitation to a gay gentlemen's club, Jack is discovered. Soon, his talent, matinee idol good looks, and affable personality propel him to the height of stardom. But fame breeds distrust.

Meeting Wyatt Maitland turns Jack’s life upside down. He wants to be worthy of his good fortune, but old demons haunt him. Only through Wyatt's strength can Jack face that which keeps him from being the man he wants to be. Love without trust is empty.

As the 1920s roar, scandals rock the movie industry. Public tolerance of Hollywood's decadence has reached its limit. Under pressure to clean up its act, Jack’s studio issues an ultimatum. Either forsake the man he loves and remain a box office darling, or follow his heart and let his shining star fade to tarnished gold.
Posted by Shiela Stewart at 7:33 AM No comments: 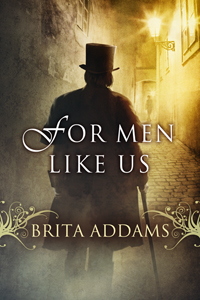 After Preston Meacham's lover dies trying to lend him aid at Sakananca, hopelessness becomes his only way of life. Despite his best efforts at starting again, he has no pride left, which leads him to sell himself or a pittance at a molly house. The mindless sex affords him his only respite from the horrors he witnessed.

The Napoleonic War left Benedict Wilmot haunted by the acts he was forced to commit and the torture he endured at the hands of his superior, a man who used the threat of a gruesome death to force Ben to do his bidding the caused.  Even sleep gives Ben no reprieve, for he can't escape the destruction he caused.

When their paths cross, Ben feels an overwhelming need to protect Preston rom his dangerous proffession. As he explains, "The streets are dangerous for men like us." 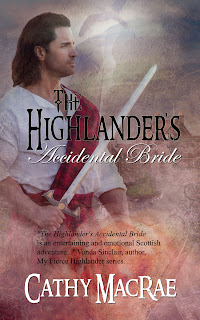 Publisher: Soul Mate Publishing: www.soulmatepublishing.com
eBook or Print eBook
Genre: Scottish Historical Romance
Heat Level: Sensual
Places to purchase: Amazon, B & N
Adult Content: Sensual
Cover Artist: Rae Monet
Blurb:
Chaos reigns between the Scott and Barde clans in 14th century . To end the generations-long feud, King Robert II of decrees Eaden, Laird Scott, and Lady Miriam Barde wed with all haste. When marriage negotiations break down, King Robert threatens Eaden with the loss of his lands and title. Forced to take matters into his own hands, the laird kidnaps his bride, only to find the young woman he mistakenly drags to his marriage bed is not Laird Barde’s daughter, but her lady companion.
Mary Marsh fights for her freedom from the laird and the unwanted marriage, refusing to accept her new life as Lady Scott. Realizing his error, Laird Scott develops an attachment to the feisty young woman he has accidentally married. Can he win her heart and convince her she is more than just a ‘duty’ to him? Or will the bond forged between the lady’s companion and the laird be destroyed by secrets and the feud that will not be laid to rest?
Posted by Shiela Stewart at 11:15 AM No comments: 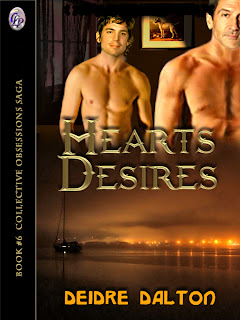 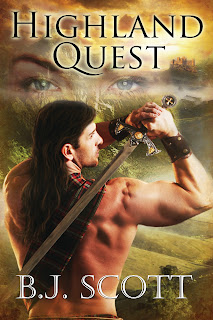 Publisher: Soul Mate Publishing: www.soulmatepublishing.com
eBook or Print or Both:  E- book and will be in print this summer
Genre: Historical Romance
Heat Level: sensual
Places to purchase: http://www.amazon.com/dp/B00AQKYPU0
http://www.kobobooks.com/ebook/Highland-Quest/book-3h45k9pPxkaA9JX
Adult Content: Sensual
Cover Artist: Rae Monet
Video Link: (if available)   http://youtu.be/P-T5WWSFBGI
Blurb: No longer content in the shadows of his older brothers, and on a quest to find his destiny, Bryce Fraser's chosen path is fraught with danger, passion, and decisions. Can his unspoken love for spirited, beguiling Fallon be triumphant in a time of war and uncertainty, or will they both fall prey to the devious plans of a traitorous laird from a rival clan?
*Be sure to also check out the first book in the Fraser brother's saga, Highland Legacy.  Book three, Highland Homecoming to be released in this summer.* 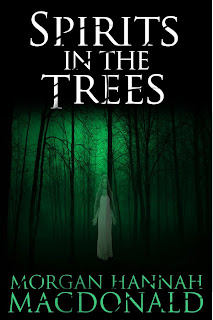 Publisher:  self
eBook or Print or Both:  Both
Genre: Horror/ Ghost   Romantic Suspense
Heat Level:  Hot, but not erotic.
Places to purchase: Amazon
http://www.amazon.com/SPIRITS-THE-TREES-TRILOGY-ebook/dp/B008FK94QI/ref=sr_1_7?s=digital-text&ie=UTF8&qid=1340912693&sr=1-7&keywords=Spirits+in+the+Trees
Adult Content: Rated R
Cover Artist: Owen Moody
Blurb:
SOME FAMILY SECRETS ARE BETTER LEFT BURIED.
An abandoned house, a serial killer, and a victim reaching out from the grave. A woman must unearth deadly family secrets before she becomes a ghost herself.
Madeline Anderson goes to Isabelle Island, Washington, to sell a family home abandoned over forty years before. Bizarre things occur the moment she steps on the property. Inside the dilapidated old house, items move about of their own accord. Strange noises come from empty rooms. She has a vivid, recurring dream of a woman running for her life. The wind rustling through the trees sounds like urgent, murmuring voices. When the cacophony dies down, one single word emerges:
MADELINE,MADELINE,MADELINE.
At first, Doug Lindstrom, the hot fireman helping Maddy restore the old home, doesn't believe anything  is going on. He’s certain Maddy is jumping at shadows because she heard the local kids call the house haunted. That is, until he witnesses horrific violence himself that he can't explain away. After Maddy’s life is threatened not once, but twice, Doug vows there will not be a third time.
EVIL DOES EXIST.
While searching for answers, Maddy uncovers astonishing secrets about her aunt's past. Finding more questions then answers, she digs deeper until she stumbles across evidence of a cold case involving a serial killer nicknamed The Seaside Strangler. Together, Doug and Maddy must unmask a killer. The lives they save just might be their own.

Posted by Shiela Stewart at 7:29 AM No comments: 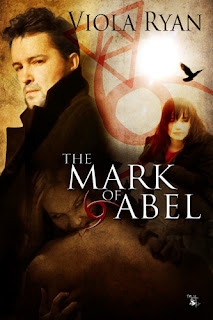 Publisher: MuseItUp Publishing: http://museituppublishing.com
eBook or Print or Both: eBook
Genre: Paranormal Romance
Heat Level: Sensual/PG13
Places to purchase:
MuseItUp: http://museituppublishing.com/bookstore2/index.php?page=shop.product_details&flypage=flypage.tpl&product_id=516&category_id=69&manufacturer_id=250&option=com_virtuemart&Itemid=1&vmcchk=1&Itemid=1
Amazon: http://www.amazon.com/The-Mark-of-Abel-ebook/dp/B00B0FSH9A/ref=sr_1_4?ie=UTF8&qid=1358130524&sr=8-4&keywords=The+Mark+of+abel
Adult Content: Sensual (no sex though)
Cover Artist: Marion Sipe
Video Link: http://www.youtube.com/watch?v=UayqdSPMFMQ&feature=youtu.be
Blurb:
Lucifer is fed up with humanity. He created hell to deter evil, but man’s inhumanity is only escalating. He just wants to return home to heaven, but ever since that little problem in the Garden of Eden, the Pearly Gates remain firmly shut to him. It doesn’t help that he’s the first vampire, an abomination in God’s sight.
Fortunately, two thousand years ago Lucifer’s estranged brother, Jesus, gave him a prophecy. To fulfill it, all Lucifer has to do is find the right artist, study her artwork and the path back to heaven will be revealed. The artist even bears a symbol so he knows who she is. Too bad she is murdered every time he finds her.
Janie’s a frustrated artist and college art teacher who wants two things—a guy she can show her paintings to and a night without nightmares. Each nightmare plagues her until she paints it. She doesn’t realize these paintings are key to unlocking her destiny, one that could redeem the original fallen angel.
Posted by Shiela Stewart at 7:22 AM No comments: