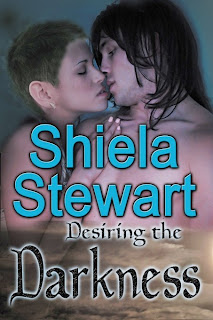 Blurb:
With the cloak of darkness surrounding Jacob’s Cove, Dante Vega must work to protect the humans from the blood-thirsty vampires trying to take over the human race. When a half-naked young woman races into his arms begging him to protect her, he is compelled to help despite the fact that she is a vampire.Before all hell broke loose, Gypsy Dawn was an average woman carrying on with her ordinary life…until she’s turned into a vampire. With no family and no where to go, she clings to Dante. Aside from his dark, mysterious, good looks, she finds herself inexplicably drawn to him. And when his life is threatened she discovers just how protective she has become.Trying to bring back the sun is not easy, especially when the creature responsible, has gone into hiding. With Dante’s long lost brother working with the enemy, one friend is killed and another is taken hostage.
Will Dante be able to save him before it’s too late?
Posted by Shiela Stewart at 6:14 PM No comments: